This page is supposed to inform about the Harbinger event. Please help adding info and media or make suggestion in the thread: Harbinger Event - Info & Docu. If you are looking for information on the Creature called Harbinger, click here

"A person or thing that foreshadows or foretells the coming of someone or something." (Wiktionary: harbinger)

According to official announcements the Harbinger Event will feature new enemies, new missions, new environments, new rare and valuable items and the end of the event will be determined by the players.

The event "will take place from November 9th until early December" (-> press release). It features several temporary missions only available until November 30th. 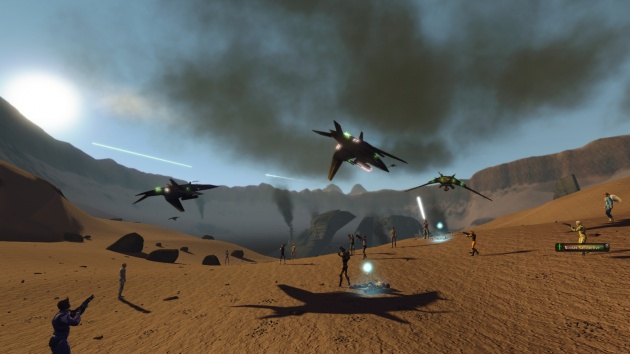 There are reports about further Elite spwans around Fort Zeus, Livas and Limnadian District.

Note: Due to a bug Steel Bird Elites didn't count for the Steel Bird Iron Challenge Missions. This has been fixed with CR2010.6.1

Note: Due to a bug Steel Bird Elites didn't count for the Steel Bird Iron Challenge Missions. This has been fixed with CR2010.6.1

The Hadesheim Crater has been redesigned. More impressions in the images an videos section.

Launch Silos can be found at:

Info on how to decode them: Decoding Robot Messages

Code given by shelly.nakajima during the mission Bad news! I'm back! decoded by aia

Code given by shelly.nakajima after the mission Bad news! I'm back! decoded by aia

EBN: At a press conference in Port Atlantis, Colonel Briers stated that the Harbinger threat has been neutralized. The factory built in the wreckage of War Titan Typhon is still in the Hadesheim crater, but the pod launch system is no longer operational.The sabotage operations, conducted by drafted colonists, were “98.9 percent successful” and the system was “effectively rendered inoperational”. Thus, Harbingers cannot be deployed by the robots.Colonel Briers noted that the launch system managed to circumvent the defense turrets at several locations, but that these surgical strikes would no longer be possible. “No one would be safe if even one of the launch silos would remain operational” he stated.Intelligence operations in Hadesheim crater will continue as well as preemptive strikes at the robot factory.Colonel Briers also stated that the community of code breakers had greatly assisted the defense against the Harbingers and brought vital information about the progress of the sabotage missions. He conveyed his gratitude to the many volunteers that collected information, cracked robot codes, infiltrated the factory, sabotaged the pod silos and defended the cities of Calypso, especially during the last days when robots pushed the weakened launch system to strike at Twin Peaks and Fort Ithaca.The colonel refused to answer a direct question whether there was any collaboration between CDF and the infamous RX Units, saying only “no comments”.

Strike teams have managed to sabotage and destroy the Harbinger deployment system! The robots’ advance has been halted dead in its track, despite Steelbirds and Harbingers. However, the robot factory in the Hadesheim crater has not been destroyed, and intelligence and strike operations aimed at the crater will continue. Colonists that have not yet signed up as CDF contractors can contact Colonel Briers in the Needle Tower in Port Atlantis.

The Spanner In The Works[edit]

Completing the spanner mission gets you the Operation Hammerhead Diploma (1 PED TT): 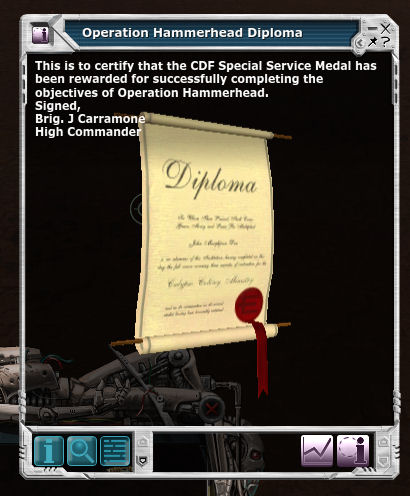 "EBN News: In a special press meeting this morning, Colonel Briers announced a change of strategy. “So far, our operations have been focused on defense and investigation; to safeguard our fragile society and investigate the threat. That strategy is now at an end. We will now take the fight to the enemy!”

Colonists who have previously helped in the investigation and defense can talk to Colonel Briers at the Needle Tower in Port Atlantis to be briefed about the new strategy."

It seems like today, the 17th November, the robos have flooded large parts of Calypso. Have a look at the photos below. The situation is similar almost everywhere on the planet.

Please report on the situation at other places in this thread: The Flood!


EBN News: Harbingers are attacking Zychion Citadel, Nymphtown and Jason Centre. An encrypted robot message was intercepted this morning, but so far it has not been decrypted. It is likely that the message was intended to coordinate the attacks, but Colonel Briers thinks that it may have a hidden purpose."
Forum Thread: EBN: Harbinger attacks, robot code not cracked 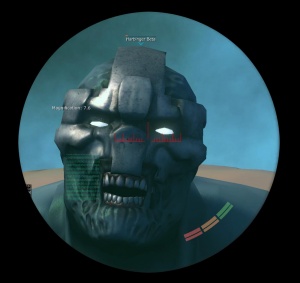 PLEASE READ THIS DOCUMENT IF YOU FIND SOMETHING OUT OF THE ORDINARY IN PLANET CALYPSO! IT MIGHT PROVIDE THE INFO YOU NEED BEFORE CONTACTING THE SUPPORT DEPARTMENT!***

Recent attacks by Steelbirds, the new flying robot model, proved only to be the beginning. We can now reveal that the robots in utmost secrecy have refitted and retooled the wreckage of the War Titan Typhon that crashed into Hadesheim six years ago into a base for their operations.

Satellite surveillance was blanked momentarily by electro-magnetic pulses from Hadesheim, and as they came back online, infrared photography revealed new structures under the cloud cover of the crater. Some of them were active, launching objects in suborbital mid-range trajectories on Eudoria.

Colonel Briers in Port Atlantis has confirmed that CDF and CFA will cooperate to take the fight to the Steelbirds. He also hinted that CDF is developing a strategy to investigate the crater and the mysterious drops over Eudoria, but as they are unfinished, CDF does not want to reveal them at the moment.

New missions: We have 17 new missions for this release, among them a seasonal Iron Challenge, a permanent Iron Challenge, a mining challenge and some missions related to the story of the Harbinger event. All missions will not be available at once. At first there will only be the Iron Challenges. A set of story related missions will open on November 11th, and a few more that concludes the event will open on November 23rd. Some missions (but not all) will close on November 30th as the event closes. If a mission is limited to certain dates, it will be stated clearly in the mission’s description.

Shared loot: We have a new feature that allows us to share loot from event mobs. The feature, if activated, splits loot among everyone that inflicted damage on the mob similarly to the rule “Damage: Stack share”. Team loot rules are ignored for these mobs.

We have activated shared loot on Steel Bird Elite spawns for this event.

Conclusion: The Steel Birds try to return to and land on a base in the Hadesheim Crater: War Titan Typhon.

Hello Calypso, this is Stave Petty reporting from Fort Fury, as you may know ive been following the robot war some and i know quite a bit of whats happening here, that being said i have recieved some intelegence from EBN and a source of mine that wishes to stay anon.

As you may or may not know, recently the robots have been exprementing with organic computing in order to evolve and become smarter and invincible, and indeed have carried out a number of tests, i belive those what those tests started are far from over. As we know, new flying robots have began to attack billys spaceship afterworld and a popular party spot down on a island near port atlantis.

As well as this the myserious RX units continue to lurk around, with thier somewhat friendly approach towards us. One has also acctually began reporting on this very site during her investigation into the way humans think.

As we know CDF say they are indeed still enemys and it would be treason to work with them, but there appears to be some kind of cover up going here, as we all know, they were originally manufactured by the exodus space station as soldiers to fight the great war. How they went from that, to enemys we still dont know. Perhaps we will get answers soon.

Well things are about to escalate, my sources tell me something is coming on the 9th of november, what i believe to be the result of the hydra tests. My source that wishes to stay anon has told me he has evidence sugguesting our beloved ex capitol Hadeshiem is going to play a part in all of this.

The source of mine that wishes to stay anon sent me a report, and in thier report they included this rather intresting photograph:

The inteligence they provided sugguests the robots that currently are active inside the crater are excavating the hadeshiem ruins, or something of that manner, which will result in the titan of war that crashed and thats left of hadeshiem to rise from the ashes in some from. How legitamate this inteligence is i am unsire at this time, but im sure we will find out very soon.

If this indeed is the case, perhaps they are trying to secure a robot outpost on calypso, a foothold, theyve always been very intrested in that area.

That being said whatevers happening, whatever is being planned, we cant afford the kind of screw up we had during the hydra tests. Yes they are going to try to outsmart us, yes they will play tricks on us to try and beat us. But we need to remember who we are, what side were on. We created this meanace, some virus caused them to turn evil, and its our responsibility as mankind to stop this menace.

stay tuned for any updates during this hard time,

We shall see what is to come

In this limited time event, which will unfold in several stages, Calypso's colonists will face a new and evolved enemy invading the landscape of Calypso. Under direction from the military, colonists will have to recon, hunt and repel a technologically advanced new nemesis. Is this relentless foe only here to hunt humans, or is it a harbinger for something far worse?

The Harbinger Event will feature new enemies to fight, a gripping storyline complete with new missions, a new environment, and an ending determined by the players. Colonists will be able to participate and find rare and valuable new items during the event. Those who take up the Harbinger challenge will also receive a special diploma from the Calypso Defense Forces documenting their part in the largest battle for survival ever seen on this planet. Since Planet Calypso is free to download, anyone can simply download the client and get started defending the world.