Missions are the equivalent of what is commonly know as "Quests". Single missions might be part of a mission chain. Missions are usually available from a specific "Quest Giver". To complete a mission you have to accomplish one or more objectives. Usually you get a reward for completing a mission which can be item(s), skills and/or the unlock for another mission.
There are several general types of missions but one mission can include objectives related to each type or even a combination of those.

Overview map of the exploring mission "Scout the Hadesheim crater"

On exploring missions you often have to reach one or more specific positions on the map.
Another example for a common Exploring mission: Scan the Robot's soil samples

On hunting missions you have to kill creatues, often a specific number of at least one specific creatue.
Another example for a common Hunting mission: Iron Challenge: 100 Droka

Mission chains are the equivalent of what is commonly know as "Quests Chains".

A mission chain is a sequence of missions that are interdependent. Usually the completion of one mission is the prerequisite to begin the next mission but also branching might occur.

The mission system of Entropia Universe has been implemented in VU 10.8.0. It is a platform system of the Entropia Universe platform created by Mindark. The mission themselves are created by Planet Partners like First Planet Company for Planet Calypso using the authoring part of the system. Accordingly missions are introduced in planet specific content releases like Planet Calypso Content Release 2010.2 that should have contained 80+ new missions.

Where / How to get missions[edit]

Currently missions are available from Mission Terminal, "Mission Brokers" and various other NPCs. Those entities appear as orange dots on the radar in the lower right corner of the HUD.

Science Officer Matthew Book is a NPC located at East Scylla Mountains at the entry of the Mobile Service Center just north of the TP.

To start interaction with Mission Terminals, Mission Brokers and NPCs either double-click them or right-click them and choose "Operate" from the menu. 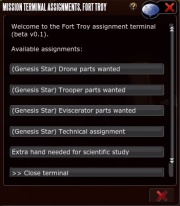 The menu of a mission terminal can display serveral missions, click one to open a dialog.

You can have mission locations displayed on map and radar by selecting the mission in the and click the "Track" button at the bottom of the Quest/Mission Log. A little compass rose behind the mission name marks which mission is currently tracked. The mission locations appear on the map and the radar as flashing circles with the next one to visit being green and the others light blue.

Mission items are specific items given to you during a mission.
You can look at them in the Quest/Mission Log but they do not appear in the inventory. Consequently they are not tradeable and a re managed automatically during the mission.

Many of this missions and even whole mission chains can be completed without any equipment. They got their name by being set in the Cyclops Area. The initial missions of the mission chains are available from Fort Troy Mission Terminal.

The Iron Challenge is a set of 87 missions embedded in 16 mission chains. 7 of those mission chains feature scouting (exploring) missions doable without any equipment as their initial missions. But since they are placed all over Eudoria and one of them on Amethera a lot of running would be needed.