In summer 2022 MindArk partnered with Enjin to sell NFTs on Enjin platform NTF.io in an auction format. 5 so-called "affiliate eggs" were sold for a total of ~? USD representing the 5 planets in Entropia Universe: Calypso, Next Island, Arkadia, Cyrene & Toulan. Each of the NFTs eggs entitles the owner to access to MindArk's affiliate program still under development. Each egg also is supposed to give its owner an Entropia Universe pet ingame after Entropia Universe' conversion to Unreal Engine 5 in a couple of years. The pet would be from the planet the egg represents and the players signing up via affiliate links would also start on the planet the affiliate egg represents.

The initial affiliate egg NFTs have been auctioned in August 2022. Each auction had a reserve price of 1 WETH (~1.600 USD) and ran for 72 hours.

As part of the new batch of mortal Insians colonizing the planet, you are here to rebuild the nation to its past magnificence.

Arkadia was discovered from a hidden signal that was decoded which was shrouded in mystery. A planet that is littered in secrets and an ancient history. Every turn reveals a new code to break, a riddle to solve and hidden treasures to be found. Controlled by a military faction, life is booming but the shadows reveal an underground market littered with danger. You can become anything you desire but the real question is... at what cost? This Egg grants the owner the ability to receive a 10% revenue share from any accounts generated through the https://account.entropiauniverse.com/new-account/?ccode=arkadiaNFT0001 signup portal. Revenue will be distributed as PED within the Entropia Universe once an avatar account is created and confirmed as the owner of this NFT. Contact Entropia Universe support for additional information.

Set on a remote planet with a unique, crystalline resource that has technological and spiritual properties.The Imperium, powerful military force lead by the cunning Will Winters arrived 1st on Cyrene, establishing numerous bases on both sea and air to exploit the crystal. The rebels and defectors from the Imperium, who have seen its evil in action, have teamed up with the native inhabitants in a struggle for power and resources.

As mankind on earth evolved, wealth and technology drove centuries long Cold wars among the world’s most powerful entities. Those who refused to align with popular political and spiritual ideologies were left abandoned by their own nations.

Pleas for open discourse, common decency, and respect for our fellow man were met with hostility and suppression of national and local support. We will start anew on our new home planet, and create the utopia we have always dreamed of.

In search of new resources, corporations of Earth sent probes and ships across the vast distances of the galaxy. Planet Calypso was discovered to be rich in natural resources and of similar composition to Earth, and was settled several decades later.In the early stages of colonization, signals from distant probes began to infiltrate the Calypso communication networks and the corporation's robot labor force revolted; a brutal war ensued that devastated the fledgling colony and forced colonists to offworld habitats for decades.

In the backdrop of an apocalyptic sci-fi landscape after the robot war, colonists struggle to resume building their new civilization despite the unknown intelligence that now controls a hostile robot force, as well as fierce mutants that have arisen from the ashes of war.

The battle for dominance of Calypso among the mega corporations begins.

ROCKtropia was probably downgraded from it's original planet status, so there's no ROCKtropia Affiliate Egg

In August 2022 a number of 3000 NFTs have been given away in Gleam giveaways solely for marketing purposes such as inflating Entropia Universe' official Twitter account with irrelevant followers.

A rural but well equipped outpost providing close access to the annual migration path of Creature:Eomon and Longtooth on Planet Calypso.

The original capital and trade center of Planet Calypso. Once a bustling urban environment, Port Atlantis is now left sparsely occupied due to the expansion of new cities and trade centers as seasoned population forged their way across the planet. It still remains as the iconic city of Calypso's history and landscape.

An enormous facility established by the robot invaders of Planet Calypso for mass production of experimental humanoid hybrid soldiers.

From 8 to 10 of August 2022 the Calypso affiliate was auctioned.

From 5th to 8th of August 2022 there was another Gleam giveaway of 1000 Entropia Universe NFTs.

4 August - 7 August 2022: Auction of Next Island and Cyrene affiliate eggs[edit]

From 4st to 7th of August 2022 Next Island and Cyrene affiliate eggs were auctioned.

From 1st to 4th of August 2022 there was another Gleam giveaway of 1000 Entropia Universe NFTs: 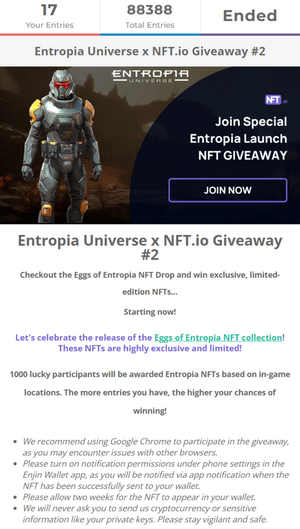 From 1st to 3rd of August 2022 Toulan and Arkadia affiliate eggs were auctioned. Both eggs went to user N1ghtmare1:

1 August 2022: Announcement of the start of the egg auctions[edit]

The Eggs of Entropia are here! Auction for the first 2 of 5 eggs: Planet Arkadia & Planet Toulan[edit]

The Eggs of Entropia are here! Auction for the first two of five eggs: Planet Arkadia & Planet Toulan!

Owning one gives you…

🥚 Companions that will hatch from the egg for the player 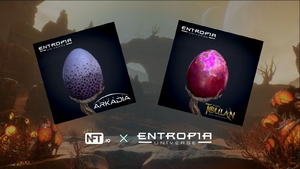 To celebrate the first utility collection on NFT.io, we’re up to our old tricks — and that means free NFTs! 🎁 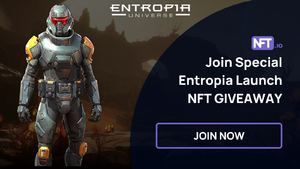 Announcement and Q&A regarding the Eggs of Entropia[edit]

It has come to light that some members of our community were able to purchase one of the test NFT’s that were placed on https://entropia.nft.io/. As this was unintended by Enjin or MindArk, and these test NFT’s are not the official utility token to signify the right to an affiliate agreement with MindArk, Enjin has issued a bug bounty to the purchaser for identifying this issue. Their test NFT’s image has been modified to ensure there is no confusion with the official tokens set to be auctioned off beginning August 1st.

Below we have answered some questions about the Eggs of Entropia that have cropped up in various threads. Please feel free to ask further questions here.

The initial auction will be on nft.io’s marketplace, once the NFT’s are purchased, the owners will have the ability to trade them directly or on any ERC-20 supporting marketplace.

How are NFT owners and affiliate licenses confirmed?[edit]

Initially, MindArk and Enjin will cooperate to ensure NFT owners and Entropia Universe accounts are verified manually before revenue is distributed to a NFT owner. As Entropia Universe evolves into Unreal 5, more automated systems are being assessed to streamline the process.

What happens to affiliate accounts if the NFT is sold?[edit]

The accounts are tied to a unique affiliate code, the NFT is the certificate of ownership. Whoever owns the NFT, once verified will receive all undistributed revenue associated with the initial affiliate code.

Do you need to link a ERC-20 wallet to your Entropia Account to purchase these NFTs?[edit]

No, the auction of these NFT’s won’t require an Entropia Account. Access to rewards from recruited accounts will require verification of ownership. This will be done manually for the time being in accordance with the NFT owner instructions here: https://account.entropiauniverse.com/account/nft/

Will you be able to see which avatars are part of the affiliates you have recruited as the NFT owner?[edit]

If the NFT is sold to another player once the pets are released, are the pets also moved to the new owner?[edit]

How will I access the revenue from accounts I generate as one of these NFT owners?[edit]

Once your associated Entropia Universe account has been verified as the owner of an affiliate NFT, revenue will be shown in the PED flow center of your account within the game. This revenue will be able to be transferred to your PED card within game, then a withdrawal must be requested through the transfer center within Entropia Universe. You will need to identify a bank account in which your funds should be sent to process your withdrawal. 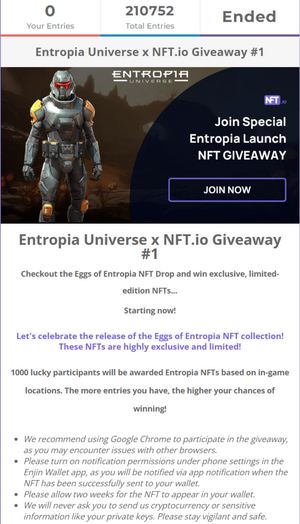 On 15th of July 2022 MindArk announced the upcoming sale of NFT based affilite eggss with the following announcement::

Ever evolving with new technologies, MindArk has been assessing recent blockchain developments and what they might offer to established virtual communities such as Entropia Universe. MindArk’s management team has determined that many of the recent gaming-related announcements in the blockchain space bear a lot of similarities to the experience that Entropia Universe has offered for nearly two decades, and thus large-scale integration of such technologies would not add significant value to the virtual universe experience.

There are, however, opportunities for targeted partnerships and system integrations which could extend the reach of Entropia Universe to new audiences, specifically enthusiasts of the “metaverse” and “play-to-earn” concepts that have received a lot of media attention recently. As such, MindArk has begun a collaboration with Enjin to release five unique eggs as NFTs (non-fungible tokens) on the ERC-20 Ethereum network via the beta launch of their new project, NFT.io.

It is MindArk’s view that the certificate of ownership utility that these eggs provide is an ideal use of NFT technology. Unlike purely speculative NFT sales that thrive on scarcity over function, these unique eggs provide rewards-earning opportunities over time via the holder’s affiliate account. The NFT may be sold at any time, allowing a new owner to build upon previous marketing and recruitment efforts. MindArk is confident that these unique eggs not only provide utility to the NFT owners, but offer value to the Entropia Universe community as a whole.

Additionally, as Enjin’s Efinity is released in the near future, these tokens will be tradable with significantly reduced fees on the Polkadot parachain network if the owners choose to do so.

To participate in this auction, please visit the Entropia Universe page on NFT.io linked below to learn how you may obtain these first-of-their kind NFTs when the auctions begin in August 2022.

Forum discussion of the announcement: http://entropiaplanets.com/threads/entropia-enjin-collaboration.23222/