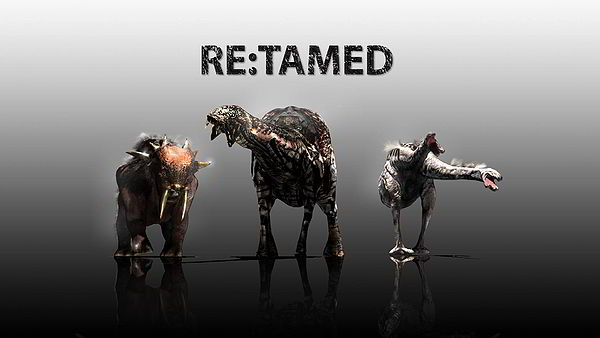 Taming and creatures as pets is an upcoming feature of Entropia Universe, a former rudimentary taming system has been abandoned in 2009. Not to be confused with ComPet.

"==Taming, pets and stables in a nutshell==" "The taming system allows players to tame creatures, keep them as "pets", train them, teach them tricks and at a later stage control them in pet battles vs other players' pets. Stables are player owned and managed estates that serve as arenas for pet battles and marketplace for pets and provide hosting and probably other services for pets and pets owners."

"No pets are bound to their planet of origin. All pets can be spawned on any planets but pets must be at least level 7 to be summoned on a foreign planet."

These are the pets currently available, for creatures to tame please refer to Tamable_creatures further below.

How taming and pets works[edit]

The easiest way to obtain a pet is buying it in form of a pet deed, in player-to-player trade or at shops.

Beware that the pet will lose all affection when it changes owner, this includes the affection towards you if it were to be given back.

Selling a pet to the trade terminal will only get you the value of its remaining energy in PED.

For taming a creature you need a special weapon, namely a whip. Also you should have put the "Attempt Tame" action from the action library (depending on keybord mode Z or Y) on your screen as a button and or bound to a key. The creatures you want to tame will attack you, but the low level creautures currently available for taming should not pose any real danger. To be on the save side so consider wearing armor.

Pets are summoned from your avatar Inventory. Pets can only be spawned on their planet of origin, unless they are shared creatures such as Daikiba and Exarosaur, the latter can be spawned everywhere.

A summoned pet will follow your avatar around, and various information and commands are available from the pet dashboard that appears when a pet is summoned.

Once a pet is summoned a Pet panel UI will become visible on the screen. The panel consists of a top name and information part and four status bars below it. 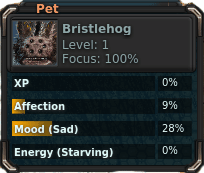 Display of the level of the pet.

The focus value will determine how much of your tricks will be gained in experience, affection and mood. Focus will regain over time but much slower if in inventory. If you push your pet too hard the benefit will be lower.

Each pet will gain affection towards you based on how well you take care of it. Building a deep connection by treating the pet well will give bonus experience and possibly other good things.

Your pet will have different moods depending on how it feels, so it is a good idea to keep your pet engaged while summoned.

Energy determines how well fed a pet is. Right click food like Nutri bars in your inventory to give it to your pet using the “Feed pet” option. How well fed a pet is will affect its mood. Letting the pet starve will eventually make it grumpy.

Existing tamed pets from the old taming system are operational in the relaunched taming system, and are indicated as Ancient pets. The old pet maturities have been merged into one of two maturities as follows:

Two new crafted Whips have been introduced. The blueprints for these items can be found while crafting weapons on any planet.

Pet names seem to be limited to 8 characters.

When the pet gains experience and the XP bar reaches 100% it will earn a new level. Reaching a new level could mean that a new trick or other abilities becomes unlocked. The effort needed to level up different pets differs as do the features that are unlocked.

To tell the pet to do a trick, bring up the context menu on the pet or press the portrait on the Pet Dashboard UI. The currently available tricks are found under the “Tricks” submenu.

Tricks will both give your avatar skills and affect the pets experience, affection and mood values. Performing tricks will also consume some energy. Pets will not be able to perform tricks when its mood is “sad”.

Several tools can be used to let the pet gain mood and affection. E.g. brushes can be used to tighten the bonds between master and pet and increase the pets stats and level.

Buffs for pets can be purchased from "Pet Center Manager" NPCs located at each stable estate. While these buffs are attached to the pet they apply to the avatar as long as the pet is spawned. It is required that the pet has reached the Loved affection level. The buff duration is real-time and decrements even when your avatar is not logged on.

These are the currently tamable creatures, for the available pets please refer to the Pets section further above.

Where to find tamable creatures[edit]

"A limited number of Stable Estates will be made available on the Entropia Universe auction. These new estates will generate revenue through different channels, as described below.

As described in the Entropia universe roadmap published on http://www.entropiauniverse.com/bulletin/buzz/2014/05/28/Communication-and-development-roadmap.xml, Pets will be released in Taming - stage 1 (autumn 2014) and the stables functionality in Taming - stage 2 later in 2014.

The stables will generate revenue for the stable managers by charging a small fee for services in the stables, for example, selling, trading and specialised training of pets. Stables will also be the hub for future Pet Battle Arenas and Controlled Creature Battle Octagons where all pet and creature activities will be held.

Stable managers can also earn PED by renting stalls to other avatars for their pets, and by providing specialised training only available at the stables. Stable managers provide housing and maintenance for stabled avatar pets, including food and energy. Better care provided by the stables will result in faster pet progress and better performance in competitions.

In addition, stables will have the ability to be upgraded with shopping booths, additional stalls, teleporters, terminals, visual additions and other unique features.

The Stables will be placed in strategic positions on each planet. Each planet will have the chance to auction these exciting and fun additions to the Entropia Universe starting on July 1 2014, with starting bids of 20000 PED.

Number of Stable Estates per Planet:

The stable estates will be implemented into Entropia Universe later in 2014."

"Some of you will be happy to hear that we plan to (finally) reintroduce Taming to Entropia Universe. In the first stage the core functionality will be quite similar to the original taming system, with added improvements to usability and fun-factor. Initially, pets will be to able accompany your avatar in its Entropia Universe travels, with more pet abilities and features planned for later stages (see below)." - Source & discussion: http://www.entropiaplanets.com/threads/communication-and-development-roadmap.11555/

"In this stage it is planned to implement additional skill-based taming abilities which will expand the capabilities of tamed creatures beyond the pre-VU10 taming system. In addition, a limited number of stables will be made available that will fulfill various roles within the taming system such as stabling, feeding, expert training, trading and more." - Source & discussion: http://www.entropiaplanets.com/threads/communication-and-development-roadmap.11555/

"Battle Arenas will be introduced which will allow tamed creatures to battle one another. Each battle will be unique, with a wide range of offensive and defensive pet buffs and upgrades along with customisable attack and defense profiles." - Source & discussion: http://www.entropiaplanets.com/threads/communication-and-development-roadmap.11555/

"A web-based Battle Arena game is planned for early 2015. The game will be developed as a cross-platform solution available on the web and for mobile devices, and will have direct ties to the Entropia Universe taming system. Players will have the opportunity to acquire, upgrade and customise their pets for battle against the pets of others.

The development roadmap in May 2014 introduced the 3 stages in which the new taming system is scheduled for release as well as the Battle arena.

Shortly after the old taming system disappeared in VU 10 (August 2009) the re-implementation of the taming and pet feature was promised for "before the end of the year" (2009).

In August 2009 with VU 10 Entropia Univese switched from Gamebryo Engine to CryEngine 2. Many features were not included in VU 10, among them the taming and pet system.