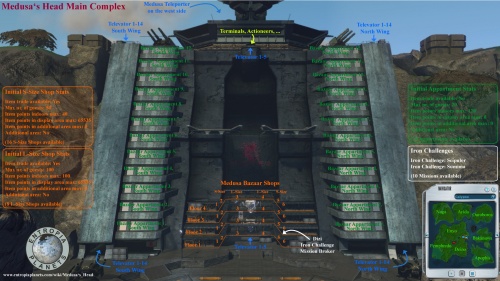 The land areas on Medusa's Head:

Natural spawns of the islands: Gokibusagi, Prancer, Allophyl, Berycled, Snarg, Estophyl, Itumatrox, Caudatergus, Cornundacauda, Hiyuru, Tripudion. In addition, some puny's spawn outside the residential area. These are the spawns that are not available to control via the DNA, but the land-manager will be able to have them removed.
(A mistake was made when we first went out with the information about Medusa, it was said that these spawns could be moved once; however that is not correct. They can only be removed. The info-page have been updated.)

There will also be fish in the waters around the islands, such as Calypsocods, Razortooths and Rippersnappers. In most cases they won't be covered by the Land Area.
There are no plans by FPC of removing or touching any existing spawns of any of these mobs.

Hunting Lodge is what you know as the Shed, however it is redesigned to fit with the Medusa Theme. 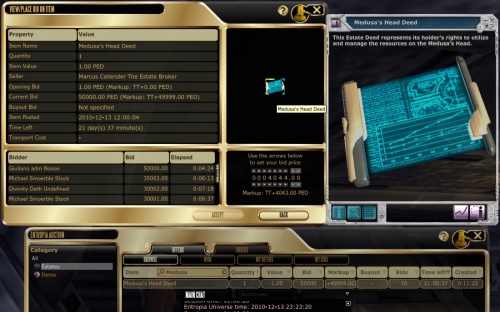 Welcome to the Medusa's Head islands Auction on Planet Calypso

Located between the Eudoria and Amethera continents, this island group is conveniently segmented into eight distinct land areas which can be administered individually by the owner. Each land area is complete with its own hunting lodge, fertilizer station, and revival terminal.

The islands are inhabited by a number of indigenous species, and fish will be found in the surrounding waters. As part of the purchase two special species DNA will be provided for the owner to breed. The estate's minerals and enmatters will also make it an attractive destination for miners. The owner will have full rights to set individual tax levels on each of the land areas, generating daily revenue from visiting hunters and miners.

The main island is divided into three large land areas, with each of the other five areas spread over the remaining islands. The main island also contains a large historic dwelling complex. Once the last bastion of human resistance during the first Robot War, and later a smugglers hideaway, the cliff-face complex has been fully renovated and now offers shopping and residential areas, a jetty for water borne visitors, landing pads for aircraft, a hangar, a direct teleporter to other locations on Calypso, as well as revival, storage, trade and society terminals.

The property will be available for viewing from December 7, with the official auction beginning on December 13 and lasting until January 3.

Bidding on the Medusa’s Head Property

To bid on the property you will need an Entropia Universe avatar account which can be created here , and sufficient PED currency on your account. The various deposit alternatives are available here.

Once you’ve created your avatar and passed through the Calypso Gateway orientation area, you’ll need to visit an Auctioneer NPC which can be found in most settlements on Calypso. Right click and operate the Auctioneer NPC to open the auction interface. Navigate to the Estate category and double-click the ‘Medusa’s Head Deed’ from the listings. Your avatar is now ready to place a bid using the interface. N.B. The 'Medusa's Head Deed' will be added to the auction on December 13.

For parties solely interested in bidding for Medusa’s Head, a special waiver of the 1% withdrawal fee will be available. To take advantage of this waiver:

The Story of Medusa's Head[edit]

In the first Robot war, the Imperial Armed Forces were pushed back. As they retreated, Special Forces set up a hidden cache of weapons and supplies on an island off Eudoria. From there, they hit the robots both on Eudoria and Amethera. The base grew from a hidden supply cache to a fortress. Defense systems were set up at the outskirts of the remote island, and bunkers and a command center were built to direct the war. From there, they fought back and pushed the robots off the planet!

When the war ended and the base was no longer needed, Special Forces simply stripped it bare and left. For some time, it just sat there, unused and abandoned, until smugglers found it.

To the smugglers, it was perfect. It was hidden and close to the flight corridors to Athena and Port Atlantis. It would be easy for any smuggling ship captain to just slip out of the path and land, or just drop the cargo right down on the islands as you flew over them, without the traffic control ever knowing.

So the smugglers took over.

Of course, it wasn’t that easy. It wasn’t just one smuggler band. There were several, and they fought for control over the base. In the end, the Medusa band rose above the others and a truce was called. Medusa was firmly in control, but as long as that fact was respected, other bands were tolerated. They refitted the old base to serve their needs: Medusa’s Head.

The Medusa band ruled Medusa’s Head for many generations of smuggler bosses. But no empire lasts forever. Kessner, the last boss of the Medusa band, died. The official reason is old age and fast living, but some people whisper that it was murder.

Whatever the cause of death, there was a problem. The problem was that there was no clear line of succession. Again blood was spilt over Medusa’s Head. However, this time nobody came out on top. The government moved in to fill the power vacuum. They didn’t want to abandon Medusa’s Head to bandits and smugglers like they did last time, so they decided to sell the base and all that goes with it to the highest bidder.

For the smugglers, it is a sad end to their tale. The few splinters that were left of the smuggler bands had no choice but to get out of the way or adapt to a new and legal life. For everyone else, it is a new opportunity on the frontier, as the old smugglers’ den Medusa’s Head is for sale!

GOTEBORG, Sweden, Dec. 3, 2010 /PRNewswire/ -- First Planet Company, developer and publisher of Planet Calypso, the oldest planet in the Massively Multiplayer Online Game Entropia Universe, announced today the auction of the Medusa's Head islands on Planet Calypso. This huge sale will allow one player to acquire the deed to the largest virtual property ever sold and potentially one of the most lucrative in existence.

Medusa's Head is the fourth major property opportunity offered on Planet Calypso. This property will be available for virtual viewing starting on December 7th to anyone playing the game and to all potential buyers that wish to visit for their first time. The auction will begin on December 13th and anyone with money in their account can bid on the property. There is no minimum and the normal 1% withdrawal fee will be waived for potential investors bidding over $50,000.00 USD. For more information on how to bid please go to www.planetcalypso.com/planet-calypso/medusa.

The Medusa's Head islands encompass 8 different revenue generating land areas. There are three on the main island and five on surrounding smaller islands. The property will also come with 2 unique creatures which will be of interest to hunters from around the planet. Additionally there will be a number of other indigenous species, as well as mining, retail and residential assets. A teleportation system is included to make travel easy, although anyone can get there by air or boat.

Planet Calypso recently saw a smaller asteroid with shops, hunting, mining and a nightclub sell for $635,000.00 USD; it was originally bought for $100,000.00 USD in 2005. Operating profitably from day one the resort recouped the $100,000.00 USD in mining/hunting rights alone in its first eight months and was previously in the Guinness World Records book as the most valuable virtual item. The auction of this attractive virtual property is expected to generate a high level of investment interest.

First Planet Company AB is a subsidiary of the MindArk Group. First Planet Company AB develops and markets Planet Calypso, a Massively Multiplayer Online Role Playing Game (MMORPG) based on the Entropia Platform, and is part of the Entropia Universe. Set in a distant future, the planet Calypso is home to an expanding human colony engaged with the natural and economic elements of establishing their new civilization.