The ability for players to temporarily control creatures (=assume the role of a creature) is a feature of Entropia Universe.

By consuming a Creature Control Capsule you can transform into a creature and gain it’s abilities, this will lock most actions and open up a new creature UI.

To consume the capsule locate the capsule icon in your inventory (open the inventory by using the "I" key (default) and look in the Materials section), right click the icon and select "Consume". Your Avatar will now swallow the capsule and transform into the creature.

Transforming into a creature requires some space around your Avatar. Capsules may also be tied to specific planets and not work on your current location. Pay attention to the Main chat window for any error messages as it will help in resolving problems.

Creature Control Capsules can be found in creature loot. The capsules can be traded between participants, e.g. in the Entropia Auction.

While in creature form you can harm other avatars even in safe zones, but they can also harm you.

The duration of the transformation is controlled by a timer, however it is possible to extend the time using the "Add time" feature.

Once you have a consumed a capsule the Mob Control Interface for the creature or robot in question will appear on your screen.

The control interface includes (read from the top left): 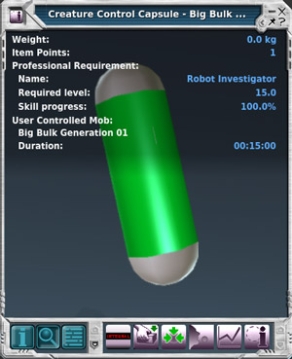 "You may already be aware of a new feature introduced not long ago which allows officials and planet partners to control various creatures during special events. This system will be extended to participants in the form of Creature Control Capsules, consumable items that will allow you to transform your avatar into a specific creature for a limited time. This fun feature will be made available exclusively through the loot system, and will be monitored closely to prevent abuse." - Source and discussion: http://www.entropiaplanets.com/threads/communication-and-development-roadmap.11555/

"Through a new Battle Octagon interface, your avatar will be able to control various creatures and challenge other avatars to battle in special CCS octagons. With lots of options for attack and defense customisation, each battle promises to be unique and exciting, especially considering the possibility of creatures and robots from different planets engaging in reckless combat against one another!" - Source and discussion: http://www.entropiaplanets.com/threads/communication-and-development-roadmap.11555/