Originally discovered by explorer Apsara Sofia Rozenkreutz and nicknamed Brontoflex until it was officially identified as a seemingly extinct herbivore species, it's now known as the Proteron. Its huge skeleton are still found around the entire Eudoria continent, but as Rozenkreutz's discovery made clear, small populations have survived the climate change in faraway spots of Planet Calypso.

The Proteron relies on its size and cell regeneration speed, but unfortunately that's also its greatest weakness. The Proteron needs to feed on trees to survive and its mouth has adapted over the course of evolution to actually swallow entire trunks whole.Since feeding in an extensive and time-consuming task for the Proteron, it's usually exposed during these periods and therefor travels in herds, leaving deserted trails in its path. These trails make the Proterons easy to track for any hunter, but the sheer size of the beast still makes it a formidable enemy.

The chart or graph is empty due to missing data

Use mouse to drag or scroll bars to scroll the map. Hover map markers for further information.

Creature Control documentation methods are not done yet!

Taming has not been re-implemented yet.

This creature is the winner of the Create a Critter competition done my MindArk on April 2009. The idea was for players to send in creature ideas and that the best idea would become a real creature.

In September 2009 the winner was announced and the Brontoflex was born. The winner of the competition was an avatar named Apsara Sofia Rozenkreutz and she won a Calypso Survival Kit consisting of an Adjusted Hedoc SK-80 Unlimited and an Isis LR53 (L) Improved.

When the creature finally came into the game in VU 10.6.2 on the 21th of December 2009 MindArk had renamed it to Proteron for some reason.

In 2010 Proteron DNA parts started dropping for the Proteron, making it possible to have this huge creature on your Land Area, if you had the luck and money to obtain all the necessary parts.

The hysteron proteron (from the Greek: ὕστερον πρότερον, hýsteron próteron, "latter before") is a rhetorical device in which the first key word of the idea refers to something that happens temporally later than the second key word. The goal is to call attention to the more important idea by placing it first. 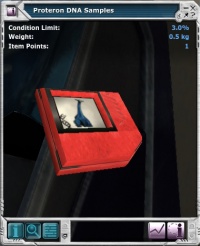 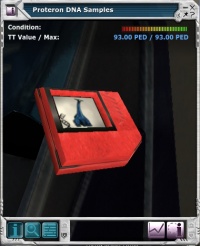 The DNA is constructed from a number of items: