Except for safezones around space stations all space is lootable PVP.

When the spacecraft your are traveling with gets destroyed your avatar floats around in space. When you get killed before tp'ing to the next revival terminal the killer receives your stackable items excluding ammo and Welding Wire. You revive at the nearest revival terminal which can be on a space station or on a mothership that has you on the guest list.

Space Travel: Flying on your own[edit]

Instead of using a space flight service you can fly on your own.

Before you go make sure the you have downloaded the content of space and you destination planet. To check click the tools button in the Client Loader and then the "Planet data" tab. Make sure that the checkbox for "MindArk - Space" as well as your destination for example "Calypso - Monria" a both marked and the status of both is 100%. 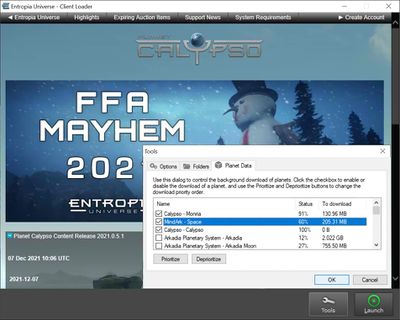 While you can fly through space with a Sleipnir VTOL it is absolutely recommended to use a Quad-Wing Interceptor (L) because it's much faster. The easiest way to get one is buying it from ingame auction. The additional speed reduces your time in space and thus the chance of encountering space pirates. It also gives you a chance to escape space creatures and space pirates. Make sure your vehicle has at least a a couple of PED usable condition left. You also might want to fully repair its Structural Integrity to survive more possible damage.

Besides the vehicle you also need a Space Thruster attached to it. The easiest way to get a Space Thruster (L) is buying it from ingame auction. The Space Thruster decays 0.1 PED when entering or leaving space. As the item has a minimal TT value of 0.1 PED you should ensure to have at least 0.3 PED = 2 uses left on the item before you fly, better a little more.

It's recommended to carry a vehicle repair tool such as the Vehicle RK-0 (L) and Welding Wire in your inventory. In case you are shot by a pirate or take damage from a space creature you can repair the Structural Integrity of your vehicle.

If you go a rather direct way you can reach each planet from all other planets with about 3 PED of fuel value in form of Oil added to the vehicle.

On entering a planets atmosphere by "flying into it" usually a fee of 2 PED is deducted. So make sure you have at least that much left on your card. The other option is to fly to a planet's Space Station and use the Teleporter on the Space Station to travel down to the planet's surface. The fee for TP usage is usually 7 PED. Best make sure you have at least 7 PED even if you plan to fly to the planet. You might need to change your plans or you might be killed and revive on the space station and find it better to just use the Teleporter.

To avoid items being looted from you in case you are killed in space you can put them in planetary storage at a storage terminal. All stackable items that appear in the "Materials" tab and the "Mined resources" tab are lootable. Please note that these items are also lootable if they are located in containers or in the storage of vehicles appearing the the "Miscellaneous" tab. An exception is oil that has been added as fuel to vehicles. Here is a overview by item storage tab / item category:

Fly to a space destination[edit]

Mark you destination on the map and best an alternative location too, like the planet you want to go to and its Space Station. For example the waypoint for Monria Space Station is /wp [Space, 58055, 81245, -55, Monria Space Station]. You can copy the colored part and paste it into chat in game to add it to your map in game. Here's a list of the most relevant destinations:

Instead of flying on your own you can use a space flight service.

Chart to show distances as well as travel time and fuel consumption per vehicle. All values approximate values.