The House of Lords and Ladies

From EntropiaPlanets Wiki - Entropia Universe Guides Wiki Info
(Redirected from The House of Lords and Ladies)
Jump to: navigation, search

The House of Lords and Ladies (founded June 26th, 2006 on planet Calypso ) is a society of colonists that join together to enjoy a great variety of activities within Entropia Universe. The society was founded and is internally is lead by Grand Master of the House Carloz DeFortissimo. Although he has relegated official society leadership to give himself higher mobility between the main society and its different Orders, he still rules as head leader.

The overall requirements to join are being an active player and a good disposition. Though it is required to be at least 20 years old, the age requirement is sometimes overlooked in favor of favorable applicants. [1] [2]

Though the society was officially founded on Calypso in 2006, the history of The House goes back into the last century. It started in 1999 as a group of Quake players who grouped to shun the arrogance of high level players and celebrate nobility of spirit and friendly interaction. They offered respite from aggressive players in a land dubbed "The Outragezone". Early names for the group were "D-Outraged", "Fallen Lords" and "Dark Lords". [3]

In the early spring of 2000 the clan adopted the name of "The House of Lords" with Sir OZ, Sir G00dlike and Sir Fegee as core founders. The clan continued gaining strength and members in subsequent years. [3]

In 2006, three members of the clan - Sir DeFortisimo, Sir Face and Sir Shike - joined Entropia Universe (then Project Entropia) and founded the society "The House of Lords and Ladies" under the same tenants and philosophy that gave rise to the original clan. [3]

The House of Lords and Ladies is subdivided into three orders to better accommodate different playstyles and to strengthen the society's hierarchy.

The House - of Lords and Ladies[edit]

It's the oldest branch of the society and functions as the main society. It accepts experienced players or graduates from the Legion of Parvenus - a subdivision aimed at new comers and inexperienced players. It deems itself "the last outpost for all kinds of people that appreciate good and decent company". It encourages personal development, friendship and a helpful attitude towards new comers.

Members are asked to be active and present in social events, have a will to develop and display a mature but lighthearted attitude. Members usually engage in a variety of professions and enjoy different activities in Entropia Universe. To retain membership it is only needed to have an overall good nature and stable gameplay. [1]

The House divides itself in Legions which concentrate on different aspects of Entropia Universe such as hunting, mining or trading.

Founded in 2008 under the name of The House - Legion Heroix and renamed in late 2010 with its current name. This is a branch on the main society that houses the Legion of Parvenus, a subdivision that helps and tutors new comers and inexperienced players so that they can better enjoy Entropia Universe and understand the intricacies of its various systems.

Membership requirements are minimal and are more based on willingness to learn and keeping a good image of the society.

Ranks are gained based on number of basic skills acquired and time spent in the society. At the end of the training process, graduating members are transferred to The House - of Lords and Ladies.

The House - of The Dark Legion[edit]

Founded in late 2011, this is an elite division of the main society. It is aimed at high end players and ranks amongst the most skilled societies in Entropia Universe. It's described as a "refining factory"[4] where the best of the best hone thier skills and polish themselves to be the brightest stars in the Entropian cosmos.

Entrance criteria are fairly strict. Requirements to enter include a minimum of 160k skill points, a stable in-game economy[4] and possession of Gremlin Armor or better. 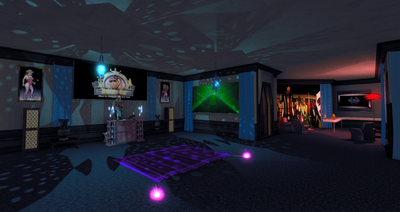 Wide view of The House's HQ

The House uses Bilton Tower 2, Apartment 3G as the headquarters of the society on Calypso. It is equipped with a small lounge bar and dance floor for social events. There is a separate meeting room to discuss society affairs and take counsel. The overall color palette is blue after The Grand Master's seemingly favorite color, who is affectionately nicknamed The Blue Boy.

The lounge bar displays a wall-high picture of Project Entropia with old graphics and is equipped with an assortment of Champagne bottles. Red lamps bathe the chairs in a smooth and relaxing light.

The dance floor is surrounded by floor lights and wall mounted laser lights. It sits beside The Hobble Bar where a bartender in Spartacus Armor serves champagne to thirsty avatars. Pictures of dancers in scant pink dresses lighten the mood and invite people back into the dance floor. There are ongoing plans to introduce a new DJ to liven up society parties. There are fleeting rumors that Bizarrick, a recently reinstated member, is applying to the post but no one has been able to confirm nor deny this claim.

The meeting room is separated from the rest of the apartment by a partitioning wall. There are various diplomas on display as well as recruitment videos on the far side. Other displays honor prominent members of the house as well as those with recent achievements. The main meeting area comprises a long table with a throne for The Master of The House to precede meetings with The Honor Council.

The House of Lords and Ladies is actively recruiting and opting for a more aggressive campaign in in anticipation of MindArk's oncoming marketing project.

Applicants are encouraged to contact members of the society through the newly implemented Player Register to inquire about entry and to build bridges as prospecting members.