Space has been rescaled. Vehicle speed and fuel consumption has been adjusted to better fit the new conditions.

To improve possibilities of traveling over the increased distances, we invented a warp drive device, that you can add to the vessels engineering interface. The warp drive device will deteriorate with every use independently of distance traveled.

Activate and use warp speed:

When traveling in warp speed the journey will go through a set of warp speed route points to the desired destination.

In order to stop vessels traveling in warp speed warp mines can be dropped.

Warp mines can be dropped from smaller vessels and will be active for a limited amount of time only.

The success rate of bringing a ship out of warp speed depends on:

Light, Medium and Heavy Weapon Cells have been merged into a single type. The same goes for BLP Packs. All existing stacks have been converted.

The following is informarion given as a preview. It might not exactly match the actual implementation. 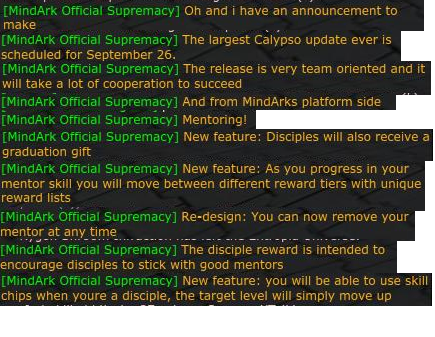 Improvements to the mission systems[edit]

Improvements to creatures and their AI[edit]

The creatures will now be able to alternate between different types of attacks each with their own set parameters and animations/sounds/particles.

The monsters will also have the ability to do AOE attacks that strike all players within a specific radius. These attacks can deal either regular damage or damage based on a percentage of the avatars current HP.