Finally, the day has come for us to release space into Entropia Universe!

Mainly, these notes contain information about new space features, but also about current systems that have been changed and are affected by space.

In introducing the Space system, we are taking a big step forward towards the goal of having a complete universe. You can now travel through and in space with the spaceships that we reintroduce. The space connects all planets in one universe and traveling between them in spaceships replaces the interplanetary teleporters. This system introduces new dynamics to the intergalactic trade which will give meaning and strength to the local planet market.

However, take care and travel safely; the whole space, except in the parking zones outside the space stations, is a lootable PvP area where you can battle your opponents.

The main space concepts are presented in these notes, but you should also check out the Beginner's Guide for some basic instructions, http://www.entropiauniverse.com/entropia-universe/beginners-guide/space-guide:

Each planet has a space station located just outside their stratosphere. You can dock a spaceship there or teleport yourself to a planet. Note that teleporting from a space station to a planet is a one-way transfer. You can also leave space by flying with a small spaceship towards a planet, currently only with either the Quad-Wing Interceptor or Sleipnir with a space thruster attached to it. The thruster is a small propulsive device used to facilitate speed travel. It is necessary when breaking through the stratosphere in both directions.

Note: When a thruster's health point is 10% from 0 you need to repair it (UL) to be able to use it or replace it (L). In space you can find repair stations on space stations and in motherships.

The only way to reach space from a planet is by flying there with a small spaceship (currently either the Quad-Wing Interceptor or Sleipnir with thruster attached to it). However, you can teleport from FOMA Fortuna's and Crystal Palace's hangars to Planet Calypso for a fee.

When you fly back and forth between planets and space you will travel through a teleportation sphere. The stratosphere is 1000 meters up from the planets's surfaces and you enter the teleportation sphere at 1100 meters. Each planet has predefined landing areas for spaceships, where you will be teleported to when leaving space for a planet.

Tip! You do not need the thruster to fly in space, so you can hitchike with someone else from a planet to a space station. Then spawn a VTOL from your Inventory and cruise around yourself.

Each time you enter a planet's atmosphere the pilot will be charged a fee of 2 PED.

Teleportation Fee from Space to Planets[edit]

Each time you teleport from space to a planet you will be charged a fee of 7 PED.

A passenger can only enter a spaceship when on the guest list.

In general, adding and removing guests from a guest list of a spaceship is similar to the current vehicle guest list behavior.

There are some major differences between managing a guest list on a mothership or a smaller ship. On motherships, the manager can remove a passenger from the guest list, during a flight. The passenger will then enter space and die a slow space death and be revived at the nearest available space station.

Avatars can request to be added to the mothership's guest list and the manager can accept or deny from wherever he or she is at. However, to add a guest without a request, requires that the manger is on board the mothership and opens the Guest List UI. Then the manager can only add avatars already added to his or her Friend List.

Motherships are extremely large vessels that can take both crew and many passengers as well as small ships. When not in use they remain where they are located.

It is not possible to drop items inside a mothership.

The following terminals and items are standard equipment on motherships:

You can enhance the status of a mothership in the following ways:

Note: Currently, these devices will not deteriorate but will do so when the reactor system has been further developed.

Defending and Destroying a Mothership[edit]

A mothership has several gunner seats where you can help defending the ship you are on, that is, if you are a guest with gunner rights. The ship is divided in several sections with separate SI values. A damaged section can be repaired from the inside, but when one section is destroyed, the complete mothership is destroyed. 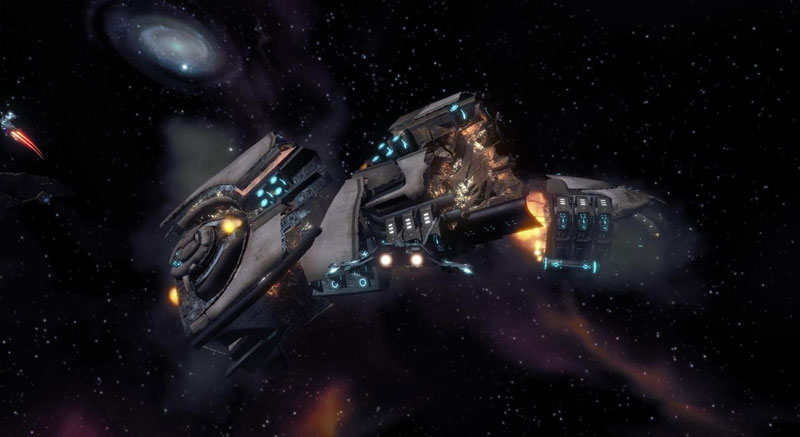 A destroyed mothership will be transferred to the closest available space station as will its crew and passengers. Each participant will be revived at the space station.

The force channel in the Main Chat can be used to only chat with passengers and crew within the mothership you are on.

Smaller ships, currently Sleipnir and Quad-Wing Interceptor, can travel both in space and at planet level, but for entering and leaving space they need to have a thruster attached to them.

When in space, if you have a spaceship (that is not a mothership) spawned and you leave it unattended for a time or if the ship is destroyed or if you die in space, it will be returned to your Inventory. The Recall all vehicles action also recalls all space vehicles to your Inventory. Note that when you are on a planet, all vehicles (spaceships as well as ground vehicles) are returned to a Storage Facility instead of the Inventory.

The whole space, except in the parking zones outside the space stations, is a lootable PvP area where you can battle your opponents. To loot one or several avatars, after you have destroyed the ship, you have to kill them during the time the avatars are floating around in space - before they choke and return to a revive terminal. You can see the avatars from the markers visible above them.

Note that you can now loot the destroyed vehicle's Inventory.

A spaceship can have a reputation, either as a good or evil ship. The total reputation point is based on both the ship's karma and the captain's and crew's skill; passengers' skills do not count.

Karma points are valid for spaceships only and currently there is only one way to gain karma for a ship: by killing other ships.

Your first karma action in a new spaceship with neutral reputation gives the ship its basic reputation as good or evil. Currently this can only be set when destroying another ship:

After the initial reputation is set you can continue to increase these points and aim for a grand title for the ship by destroying other ships.

What you should do to continue to gain evil karma for the ship:

What you should do to continue to gain good karma:

Changes in Current Systems and Tools[edit]

The following vehicle actions are disabled in a mothership:

The following vehicle action is disabled when flying in space with a spaceship that is not a mothership:

When opening the Map UI, when you are on a planet you will now only be able to view the map of that planet and space. When in space you will be able to see all planet maps and space.

Changing your download settings and priorities for content is no longer accessible from the Map UI. Please use Tools in the Client Loader instead.

Mindforce teleportation, including wormhole, cannot be used on motherships or space stations.

To further spur the interplanetary travel and economy, the auctions will be bound to each planet. This means that you can still view auctions on all planets, but for you to place a bid on an auction or collect an item, you have to be on the specific planet.

Items that MindArk put up for auction, such as the motherships after this release, will be universal. These auctions can be bid on and the items collected from all planets having an auctioneer.

Tip! As a spaceship manager, remember to keep an eye on supply and demand for various goods on different planets; you will have the opportunity to retain the interplanetary trade balance.

In space and in contaminated zones you can now loot the destroyed vehicle's Inventory.

The vehicle repair tool that you have used to repair vehicle's SI value can also be used on the new spaceships and the mothership interior. However, this tool now requires welding wire to function.

Note that if you want to travel into space make sure you download space content before going there!

No wiki documented changes yet.