"The Eomon are on the Move!

The Eomon migration period is here. Take part in a spectacular piece of Calypso history and watch the majestic Eomon migrate over the plains of the Eudoria continent. Known for its annual migration pattern and special loot, the Eomon migration has been a popular seasonal hunting event for many years on Calypso. In the wake of the mighty Eomon herd, predator creatures such as Atrox and Mul mutants also follow, making the migration of these majestic beasts a must-see for colonists of all professional standings. Since the introduction of vehicles on Calypso, most colonists have the ability to get a glimpse of the migrating creatures from a distance, photo safari style, without putting their lives at too much risk. ..."

"Based on information gathered from previous migrations, RDI Xenobiologists have released the predicted migration paths for both the Eomon and the Longtooth species. In the attached map, the predicted path of the Eomon is drawn in red with the migration starting in the eastern parts of the Eudorian continent, passing near Ashi before terminating in the south. For the Longtooth, migrating during the same period, the estimated migration path is drawn in yellow. The Longtooth migration normally starts in the northwest in the Cape Corinth area, and ends near Fort Ithaca." 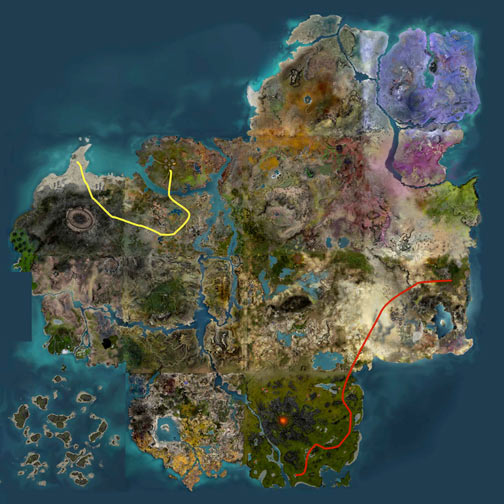 The RDI Science tent in Minopolis

"Hunting the magnificent Eomon is of course exciting by itself. However, your efforts can also assist scientists to better understand Eomon biology and migration patterns through the collection of biological samples.

Scientists in the RDI Xenobiologist department now believe that a number of questions can be answered by looking at Eomon DNA with new technology. To do this, they need help in collecting Eomon Blood Samples. If you are up for the challenge of collecting these samples, please visit the RDI Xenobiologist in the science tent at Minopolis, located right next to the Minopolis teleporter." 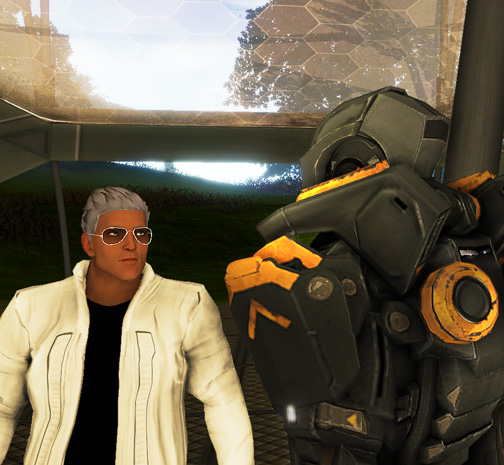 Eomon Blood samples can be turned in at the Mission Broker in the Minopolis Science Tent for 3 different Melee amps as rewards.

The mission is not repeatable. Each blood sample type can be turned in just once, so you can just turn in a total of 5 samples. You can get a total of 3 different amps: one Level I amp, one Level IV amp and one Level VI amp (other amps such as Level II, III and V are believed not to be in game yet). To get all 3 amps you need to turn in all 5 different blood sample types. Sequence doesn't matter and you can turn in samples any time, for example 1 today, 2 more next week, and so on.

However, since the Blood Sample types greatly differ in value it is recommended to turn in the cheapest first:

Once more in a tabular overview:

Further info and discussion can be found in this thread: Thread: http://www.entropiaplanets.com/threads/converting-eomon-blood-samples-into-melee-amps.11626/

Elvyn Vies, detained for several weeks for illegal collection of Eomon DNA samples, was found dead in his cell this morning. Simultaneously, the contraband DNA samples were stolen from a remote RDI storage facility. Four RDI and CDF employees were killed during the two assaults, which were captured by security cameras. Both men involved in these attacks are known associates of professor Charles Marvin. Elvyn Vies also appears to have been under Marvin’s influence before being arrested.

Charles Marvin has been on the run ever since being declared a traitor to Calypso due to gross negligence during the Feffox crisis, leading to multiple deaths and large-scale destruction. His motivations for procuring these samples are currently unknown. However, the CDF is currently allocating additional resources to apprehend the men involved and recover the samples quickly.

Further information about the fugitives cannot be released to the general public at this time. CDF believes that releasing the information may lead to a higher risk of violent confrontations between the suspects and colonists. Because of their apparent interest in Eomon DNA, we hope to apprehend these suspects as soon as possible. If this does not succeed, the CDF may consider releasing further information to ensure these criminals are brought to justice.

Until then, be assured that CDF are doing all they possibly can to keep you safe.

RDI officials reports that Eomon pheromone levels have dropped considerably, indicating that the migration will end shortly after the weekend. Some pockets of Longtooth separated from the main herds can still be found in locations around Eudoria.