Difference between revisions of "Battle Simulator"

The Entropia Universe Battle Simulator is a time-trial assault course. Exterminate all robot enemies and finish as fast as you can!

Battle Simulator runs are performed using a premade avatar with standardized skills, weapons and armor. Ammo consumption and deterioration are disabled. Additionally, all buffs are paused while inside the Battle Simulator instance.

How to Get Started

The Battle Simulator can be accessed anywhere in Entropia Universe:

Completing the Battle Simulator course gives access to a special loot crate. Unclaimed loot from other participants’ uncompleted runs may also increase the total value of the loot crate.

Completion times will be entered into the Battle Simulator weekly leaderboard, where participants compete for additional rewards (see the “Leaderboard” section below).

Be on the lookout for the occasional message at the start of each run announcing extra bonus loot for completing the instance!

You can view the current leaderboard by pressing the ‘Scores’ button opposite the ‘Register’ button in the Event List interface (see above).

Checking Times on the Leaderboard

A portion of each Battle Simulator entry fee is added to the leaderboard prize pool; the current value of the prize pool can be viewed on the leaderboard display. Prizes are distributed using a dynamic payout structure: the more runs attempted, the more positions that will receive a prize and the larger the prize values. On Mondays at 02:00 [EUT|UTC/EUT] leaderboard prizes are delivered to the planet storage of each winner’s current avatar location, along with a confirmation message sent via the Message Center.

A symbol directly under a participant’s ranking number indicates that the participant will receive a prize for their current leaderboard position. Hover over the symbol to see the current prize value.

Just taking part in the Battle Simulator could put extra PED in your pocket!

How to Enter the Battle Simulator

The Battle Simulator will be a platform-wide solo instance in the form of a ‘time trial assault course’. You must destroy all enemies in each level as fast as you can. Prizes are given for completing the course. Additionally, there are extra prizes for climbing to top positions on the weekly leaderboard.

Battle Simulator runs are performed using a special premade avatar, so that all participants are on an equal footing, important for promoting the competitive aspects planned for this new system.

This ‘instant-access’ game mode may encourage some players to specialize in the Battle Simulator. Ultimately, this will also contribute to the economy of Entropia Universe as a whole, as the Battle Simulator game mode runs parallel to the existing Real Cash Economy and Avatar progression model.

On February 28, 2017 the Battle Simulator will be released as a prototype and will still be undergoing development. Your feedback will therefore be a vital part of the development process. Your contributions will be welcomed in the community forums.

More information will be available soon.

**EDIT** An earlier version of this article stated:

This was a miscommunication. The initial prototype release of the Battle Simulator will not reward participants with skills; however skill rewards may be considered in the future. 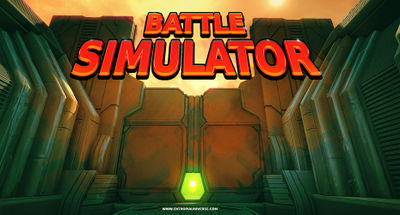 #2 Where All Avatars are Equal!

Activities in Entropia Universe usually require a certain amount of planning and preparation. This takes time. Furthermore, it can be difficult for new players to compete with veterans who have accumulated high skill levels and equipment.

The Battle Simulator is for everyone and will be instantly accessible via the Entropia Universe user interface (UI). Avatars will compete under identical conditions: standard ‘simulator’ skill levels and weapons/ammo are applied upon entering the simulator. It’s stripped-down, old-fashioned arcade action where finishing and getting the fastest time is all that counts. Only your reflexes and strategies will determine your place on the leaderboard and the prizes you win.

The Battle Simulator will go platform-wide on the planned version update (VU) on February 28, 2017.

More information will be sent out soon, so watch this space!

A platform-wide Battle Simulator prototype will be available from your Avatar's UI in the upcoming VU.

We’ll be bringing you more information on a regular basis, so stay tuned for the next update!